Aspirin (BAYER ASPIRIN, DURLAZA, ECOTRIN, VAZALORE) is one of the most commonly used drugs in the world. It belongs to the family of drugs called nonsteroidal anti-inflammatory drugs (NSAIDs), which includes many other medications such as ibuprofen (ADVIL, IBU-TAB, MOTRIN IB, PROFEN) and naproxen (ALEVE, ANAPROX DS, NAPRELAN, NAPROSYN). First discovered by a German scientist, Aspirin has been used for more than a century to treat pain, fever and inflammation. It often is used to treat arthritis in older adults. For those who want a pain relief product that can prove effective for many different types of pain, Aspirin Tablets are a good choice. Aspirin can help to alleviate a wide range of pain and symptoms stemming from a variety of problems, including headaches, toothache, period pain, rheumatic pain, sciatica, and migraines amongst others. 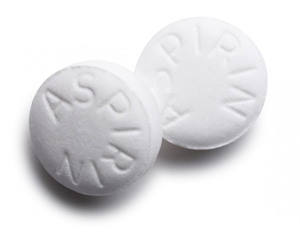 A major government-funded clinical trial demonstrated that long-term daily use of low-dose aspirin in elderly adults who did not have cardiovascular disease, dementia or physical disability did not result in a longer life span free of dementia or major disability, nor did it decrease the risk of heart attack, stroke or other serious cardiovascular disease. However, it did increase the risk of major bleeding. Three articles describing the results of this important trial, called ASPREE, were published in the Oct. 18, 2018, issue of the New England Journal of Medicine. Like other NSAIDs, aspirin can cause potentially serious bleeding in the stomach or intestines. Bleeding can occur at any time and without warning, and older people are more likely to experience such adverse effects. Decades ago, aspirin was found to inhibit platelets and, therefore, to prevent clot formation. Because clot formation plays a key role in the occurrence of heart attacks and many strokes, numerous clinical trials were conducted starting in the 1970s to see whether the use of aspirin would decrease the risk of these common cardiovascular diseases, as well as the risk of dying from cardiovascular causes.

Based on these trials, the Food and Drug Administration (FDA) has approved the use of aspirin to reduce the risk of a subsequent heart attack or stroke and the risk of death in patients who have already had a heart attack or stroke or who have other evidence of cardiovascular disease, such as angina (chest pain due to inadequate blood flow to the heart) or a history of a coronary artery bypass operation or other procedure (such as placement of a stent [a small metal tube]) to treat a blockage in a coronary artery. Such use of aspirin to reduce the risk of additional heart attacks or strokes is known as secondary prevention. Aspirin also is often recommended by doctors to prevent heart attacks, strokes and death in patients who do not have a history of cardiovascular disease. This use of aspirin is called primary prevention. For years, Public Citizen’s Health Research Group has cautioned against using aspirin for primary prevention of heart attacks and strokes for two reasons. First, there has been no convincing evidence that aspirin offers significant benefits when taken for primary prevention of these adverse cardiovascular events. Second, there is clear evidence that aspirin increases the risk of major bleeding.

In the trial, which was funded in part by the U.S. National Institutes of Health and its counterpart agency in Australia, researchers enrolled more than 19,000 elderly adults who were living independently in the U.S. or Australia from 2010 to 2014. To be eligible for the trial, black or Hispanic individuals in the U.S. had to be age 65 or older; all other individuals had to be age 70 or older. At the time of enrollment, subjects had no known history of cardiovascular disease (such as a prior heart attack, stroke or angina), dementia, substantial physical disability or a high risk of bleeding. Notably, the majority of subjects had one or more risk factors for cardiovascular disease at the time of enrollment, including hypertension (74 percent), high blood cholesterol levels (65 percent), diabetes (11 percent) and current smoking (4 percent). The subjects were randomly assigned to receive either a 100-milligram enteric-coated aspirin tablet or a placebo tablet once daily and were followed for a median of nearly five years before the trial was ended in 2017. They had annual followup visits with the researchers and were contacted every six months by telephone between visits to collect additional information. The primary outcome of the trial was whether the subjects survived free of dementia or persistent physical disability. The researchers also assessed the rates of death from any cause, cardiovascular disease events (including fatal and nonfatal heart attacks and strokes, sudden cardiac death, other deaths attributed to coronary artery disease, and hospitalization for heart failure), cancerrelated deaths and major bleeding.

In conclusion, the results of the ASPREE trial show that the daily use of aspirin for primary prevention of cardiovascular disease clearly causes harm but does not offer any meaningful benefits. Aspirin for Pain Management. It is commonly used to treat both acute and chronic pain conditions. Aspirin is available in both over-the-counter and prescription strengths, and can control fevers, or is an antipyretic, as well as treat mild to moderate pain. If you have been diagnosed with cardiovascular disease, such as a heart attack, stroke or angina, you should be taking a daily dose of aspirin to prevent a subsequent heart attack, stroke or other adverse cardiovascular events unless you are allergic to aspirin or at risk of major bleeding or other serious complications while taking the drug. If you have never had a heart attack, stroke, angina or other cardiovascular disease, you should avoid taking daily aspirin for the primary prevention of such disease, particularly if you are elderly.