Naloxone as the Opioid Overdose Antidote

The opioid epidemic remains a critical public health crisis, with approximately 100 Americans dying from an opioid overdose each day. Multiple strategies have been undertaken by states and the federal government to combat this crisis, such as organizing prevention efforts, improving surveillance and data collection, and increasing consumer awareness of opioid misuse and overdose. Additionally, most states have implemented policies aimed at improving access to the opioid antagonist naloxone beyond traditional prescriptions.

Naloxone temporarily reverses the effects of opioids and can save lives when administered in time following a potentially fatal opioid overdose. It is available as an autoinjector product sold under the brand name EVZIO, a nasal spray form sold under the brand name NARCAN and multiple generic forms that are manually injected. Evidence from a recent study published in the Journal of the American Medical Association suggests that implementation of laws expanding naloxone access by authorizing pharmacists to dispense the drug without a prescription may result in fewer opioid-related deaths.

For this study, researchers sought to identify the types of state-level naloxone access laws, if any, that are associated with decreases in fatal and nonfatal opioid overdoses. The study also compared these outcomes in states that implemented these laws with those that did not. 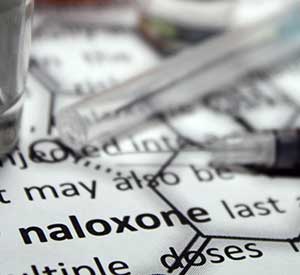 The researchers used three different federal databases to gather information on naloxone prescriptions paid for by state Medicaid agencies from 2010 to 2016 and on opioid-related death and nonfatal opioid-related emergency department visits from 2005 to 2016 across all 50 states and the District of Columbia. They also used the data to calculate the rate of naloxone prescriptions among individuals receiving Medicaid.

Finally, the researchers collected information on laws regarding naloxone access through the Prescription Drug Abuse Policy System, which tracks state laws related to prescription drug abuse, as well as from other academic and legal sources. The investigators broadly categorized state laws that affect naloxone access into three different types:

The study researchers also accounted for other variables that may have affected the state rates of fatal and nonfatal opioid overdoses, such as enactment of medical marijuana laws, which may affect opioid mortality, as well as state-level expansions of Medicaid eligibility under the Affordable Care Act that could have impacted naloxone distribution.

The study also found that monthly rates of fatal overdoses and nonfatal opioid emergency department visits overall remained high between 2005 and 2016, but naloxone prescription rates were insubstantial from 2010 to 2016.

Adoption of indirect authority and weak naloxone access laws did not result in any significant changes in naloxone prescription rates. Furthermore, these laws were not associated with any changes in trends in opioid-related mortality, nor did they impact the rate of nonfatal overdoses.

In contrast, adoption of direct authority laws was associated with a large increase in naloxone prescribing rates. Additionally, overdose trends prior to the introduction of direct authority policies were similar in states that adopted such laws and states that did not adopt them. Most importantly, there was an estimated 27% decrease in opioid-related deaths by the second year after adoption of such laws and a 34% drop in subsequent years. Interestingly, by three or more years following adoption of direct naloxone access laws, there was a 15% increase in emergency department visits for nonfatal opioid overdoses.

Implications and limitations of the study

Overall, this study found that the adoption of laws permitting pharmacists to freely distribute naloxone was associated with significant decreases in opioid-related deaths. There also is evidence to suggest that the effects of these laws magnify over time. The study revealed an association between implementation of direct authority laws and increased emergency department visits for nonfatal overdoses, which could be consistent with more opioid overdose patients surviving because of naloxone treatment and being transported to an emergency department for definitive treatment, although other factors may have played a role.

The researchers did acknowledge that their study had several limitations. First, the data on naloxone prescriptions was restricted to patients enrolled in Medicaid, and the changes seen in naloxone prescribing in states that implemented direct authority laws on naloxone may not apply to other populations. Second, there were a limited number of states that had adopted direct authority naloxone access laws. Third, the study could not address the long-term effects of these policies, as they have only been implemented in recent years.

Additionally, the investigators assumed that adoption of these laws did not impose changes on opioid-related data collection, although inconsistencies by which opioid-related mortality was coded across different states may have existed and changed over time. Finally, states that passed direct naloxone access laws also may have simultaneously improved substance abuse treatment access or implemented other supportive policies to address opioid abuse that may have reduced opioid-related overdoses, making it difficult to isolate the effects of direct naloxone access laws from other initiatives and policies.

Despite these limitations, this study strongly suggests that state laws that authorize pharmacists to freely dispense naloxone can save lives, thus curtailing the most devastating effects of the ongoing opioid epidemic.